What does the Bipartisan Infrastructure Law mean for OSMRE's AML Program?

The Infrastructure Investment and Jobs Act

The Bipartisan Infrastructure Law (The Law), P.L. 117-58 “The Infrastructure Investment and Jobs Act,” was enacted on November 15, 2021. This enacted legislation included language that directly, or in some cases indirectly, impacts OSMRE. In addition to the extension of abandoned mine land (AML) fee collections and mandatory AML Grant distributions, $11.293 billion in new funding was authorized to be appropriated for deposit into the Abandoned Mine Reclamation Fund. 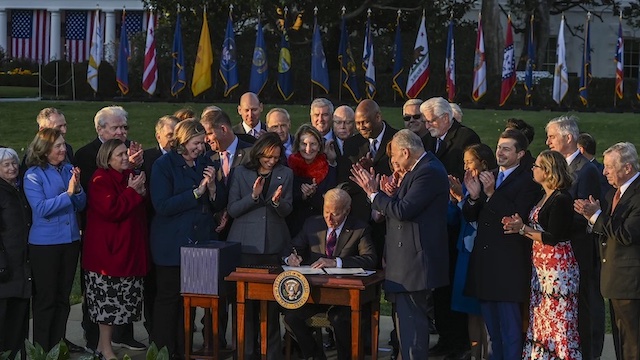 How to Apply for AML Grants under the Bipartisan Infrastructure Law

Provisions under the Law that impact the AML Program

With the passage of the Bipartisan Infrastructure Law, OSMRE takes on a new opportunity to invest in our infrastructure and benefit the American public for the next generation.

This key investment will improve federal stewardship of our critical infrastructure and significantly increase OSMRE efforts to support our partners, stakeholders, Tribal nations, and communities. Most notably, this federal law expands investment in the Abandoned Mine Land (AML) program. Implementing this law and delivering meaningful results is a top priority for OSMRE.

In addition to the changes to the existing AML Program, the law authorizes $11.293 billion to be deposited into the Abandoned Mine Land Fund to be distributed as follows: 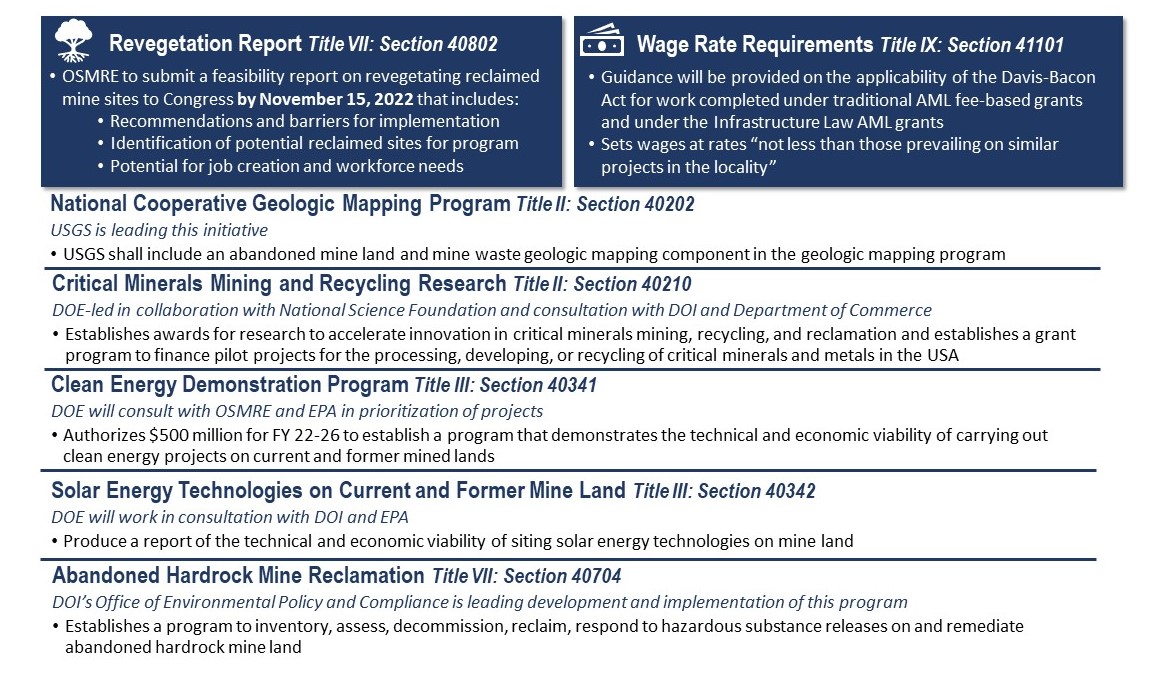 The distribution announced on February 7, 2022, is the first of 15 annual installments under the BIL that will provide approximately $10.87 billion (after BIL directed reductions) for AML reclamation projects, in addition to funds available under AML-fee based grants.

As directed by the BIL, the distribution amounts were based on the number of tons of coal historically produced in each State or from the applicable Indian lands before August 3, 1977. OSMRE relied on the March 1980 Final Environmental Impact Statement (OSM-EIS-2) to ascertain these amounts and then calculated each State’s or Tribe’s percentage of total historic coal production.

To support the implementation of these historic investments and new programs for reclamation and environmental stewardship under the Bipartisan Infrastructure Law, see the additional resources on federal funding.

From the Department of the Interior

From the Biden-Harris White House

Following passage of the Bipartisan Infrastructure Law (BIL), the Office of Surface Mining and Reclamation Enforcement (OSMRE) has received several questions as to whether the BIL’s provisions for reclamation encompass funding for certain acid mine drainage (AMD) projects.

Below, OSMRE provides guidance on some of these questions.

No – the annual AML fee-based grants that states and Tribes receive are separate from the Bipartisan Infrastructure Law (BIL) AML grants. The AML fee-based grants are funded primarily by reclamation fees and distributed as required by section 402 of SMCRA, while BIL AML grants are funded by moneys from the United States Treasury and will be distributed as required by section 40701 of the BIL.

The distribution announced on February 7, 2022, is the first of 15 annual installments under the BIL that will provide approximately $10.87 billion (after BIL directed reductions) for AML reclamation projects, in addition to funds available under AML-fee based grants. The BIL AML guidance document published on July 21, 2022, provides additional details on the BIL AML grants and expectations for the program.

No. As directed by the BIL, OSMRE will be distributing approximately $725 million annually for 15 years, beginning in FY2022. Eligible states and Tribes will receive these annual BIL AML grant distributions for the remaining years, subject to any required adjustments.

As directed by the BIL, the distribution amounts were based on the number of tons of coal historically produced in each State or from the applicable Indian lands before August 3, 1977. OSMRE relied on the March 1980 Final Environmental Impact Statement (OSM-EIS-2) to ascertain these amounts and then calculated each State’s or Tribe’s percentage of total historic coal production. Once calculated, that percentage was simply multiplied by $10.87 billion and divided by 15 – with the exception of Alaska.

Alaska had an unfunded inventory of roughly $25.8 million, so its 15-year allocation was increased from $3.3 million (under the formula) to raise its total to $20 million.  The roughly $16.7 million in extra funds to Alaska resulted from a recalculation among the states and Tribes in proportion to their historic coal percentage.

OSMRE is still drafting guidance related to the distribution calculations after FY2022, but the historic coal production numbers in the March 1980 Final Environmental Impact Statement will not change (OSM-EIS-2). However, as eligible states and Tribes update their inventories, OSMRE will adjust distributions to ensure that each eligible State and Tribe receives at least $20 million over the course of the 15-year distribution, unless the amount needed for reclamation on State and Tribal lands is less than $20 million.

The BIL AML guidance document encourages states and Tribes to meet the recommendations set forth in the guidance document for BIL AML program implementation to the extent those steps are possible and consistent with applicable State or Tribal law.

No, not at this time. Given that the CEJST tool is currently in beta mode and is still being developed to appropriately represent impacted legacy coal mining communities, the BIL AML guidance document offers a broader definition of a “disadvantaged community” based on the OMB and CEQ Interim Implementation Guidance for the Justice40 Initiative. If this changes, OSMRE will work with states and Tribes to incorporate the changes into their programs. In the interim, State and Tribes should identify opportunities through public engagement at the local level with affected communities to prioritize projects that deliver benefits to disadvantaged communities that reduce environmental burdens in alignment with the overall objectives of Justice40 Initiative.

Yes. Eligible states and Tribes will be able to apply annually for the amount specified in each Fiscal Year BIL grant distribution.

Yes. OSMRE is requiring a separate grant application for BIL AML funding to ensure, consistent with federal financial assistance requirements, its ability to track the expenditure of BIL funds, ensure proper oversight of taxpayer dollars, facilitate audit reviews, be responsive to reporting requirements, and enhance transparency of the use of funds. OSMRE will continue to work with the states and Tribes to develop procedures that minimize burdens on applicants from having separate BIL and fee-based AML applications.

OSMRE expects to announce the availability of funding to assist states and Tribes in updating their e-AMLIS inventories before September 30, 2022.

Yes. OSMRE will provide additional information about the nature of the needed updates to the AML Reclamation Plans at a later date.

Yes. States and Tribes are not required to complete the AML Reclamation Plan update, review, and approval process as a prerequisite to receiving BIL funds.

Yes. Eligible states and tribes may use BIL AML grant funds to operate, maintain, and rehabilitate AMD treatment facilities as part of the activities described in section 40701(c) of the BIL. These uses are contemplated by the BIL, and nothing in the relevant portions of the BIL or SMCRA forecloses these uses.