Official websites use .gov
A .gov website belongs to an official government organization in the United States.

Coal Mine Fires and Burning Refuse

Caveat: Coal mine fires or underground mine fires are generic terms for coal seam fires.  The reason the “mine” is used within the description is due to the starting point of the fire.  The majority of coal seam fires start within active or abandoned coal mines.  It is important to note that the mine itself is not on fire, but the remaining coal pillars, remaining coal seam, poor quality coal, or burnable debris left behind is what burns.

Majority of mine fires start through careless human activity, such as burning debris within an abandoned surface mine; however, mine fires can also start naturally via forest fires, lightning strikes, lava flows or other natural heat sources.

Underground coal mine fires occur around the world, sending thousands of tons of soot, toxic vapors, and greenhouse gases into the atmosphere, leading to pollution of surface and groundwater, mine subsidence as the coal is consumed, and ignition of forest and structural fires. Areas like the resort town of Glenwood Springs, Colorado has been plagued by series of suspected mine fire caused forest fires which burned thousands of acres of forest and many local residences. 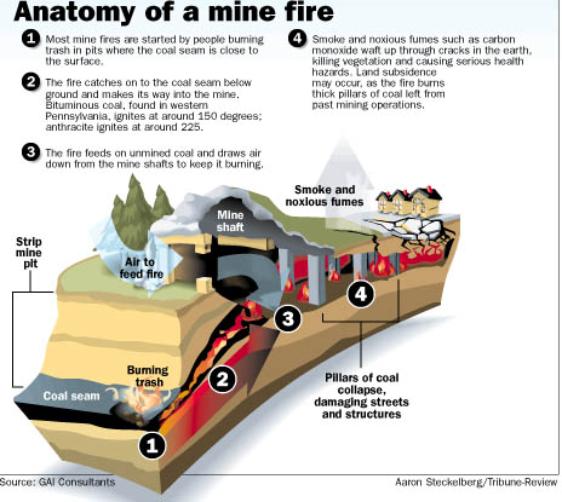 Anatomy of Mine Fires Chart

When the fire travels into the ground from the surface it creates a thermal cycle. The thermal cycle consists of the fire heating the air causing it to rise and escape through passageways in the ground.  The point on the ground surface where the heated air discharges into the atmosphere are known as vents.  The heated air also carries the greenhouse gasses, noxious fumes, soot, and smoke. These vents are extremely dangerous and pose a serious health risk.  Vents encountered or discovered need to be avoided, never get closer than 100 feet to a vent.

Back at the fire, with the hot gasses rapidly venting, this creates a negative pressure at the fire face.  Cooler, oxygenated air drawn from the atmosphere outside of the discharge vents is pulled into the ground and ultimately to the fire, thus completing the thermal cycle.  As the fire spreads into the coal seam new vents can form and old vents can change becoming intake vents. 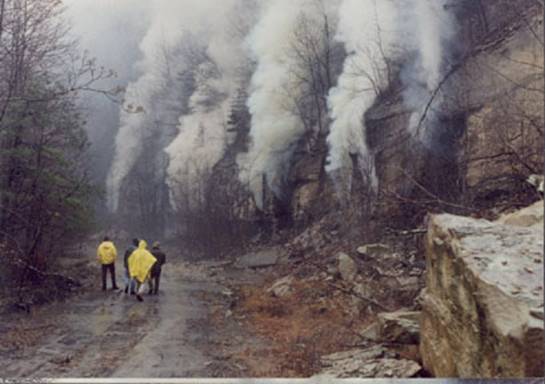 Eastern Kentucky Mine Fire. The smoke is coming from underground haulage ways, exposed by surface mining. (SOURCE: Geology of Coal Fires: Case Studies from Around the World, The Geological Society of America.

According to e-AMLIS, in 2013 there were 98 underground mine fires in 9 states. This is considered to be an underestimate for the actual number of fires nationwide. 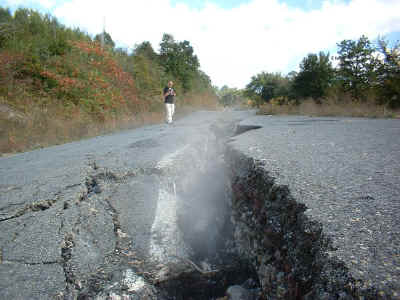 Road Subsidence and venting of mine fire in Centralia, PA

Coal Mine States address mine fire and coal refuse fire related emergencies within the states of Michigan, Maryland, and Georgia and within the Commonwealths of Kentucky and Pennsylvania. These projects range from burning coal refuse piles that threaten to ignite forest fires to underground mines fires that can burn beneath buildings, roadways and grounds releasing deadly gases and leading to mine subsidence. Abatement methods range from complete excavation and quenching with water (where practicable and affordable) to the use of specialty foaming cements and fire fighting foams that are injected into the fire through boreholes drilled from the ground surface. The intent of the injection is to isolate the fire with a barrier of foaming cement followed by the extinguishment of the fire by using a fire fighting foam. Other techniques that may be used include the use of liquid nitrogen to extinguish the fire by the rapid removal of heat. 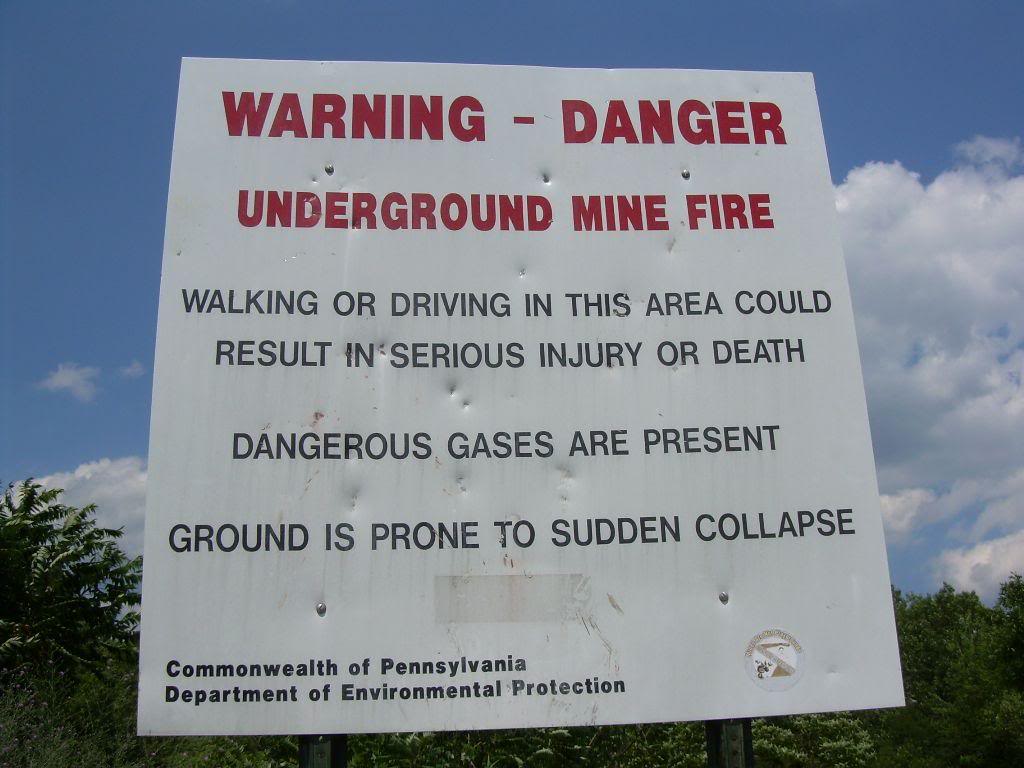 Types of mine fires:

Mine fires or coal seam fires are Class “A” fires according to the U.S. Fire Administration.  Class “A” fires burn materials such as wood, paper, cloth all of which leaves ashes.  Common extinguishing methods for Class “A” fires is the use water or foam to cool or smother the fire.

A mine fire can also at times be a Class “B” fire when pockets of methane are encountered.  This would cause a flash or fire ball which may burn for several minutes to several hours dependent on the amount of available methane.  Fortunately, these Class “B” fires occur underground and would not be noticeable above the ground surface.

The ignition temperature for coal is dependent on the type of coal and its moisture content.  The temperatures listed below are rough average temperatures of the types of coal as compared to wood.

First of all, stay clear of the vent.

If the smoke or vent is near/entering a building or is in danger of causing personal or property damage, call 911.

If you discover a vent where there is not an immediate health or fire risk, contact your states abandoned mine lands office and notify them of your discovery.

When notifying your state via phone or email, please include or have ready the following information: